The fringe of fashion! Kylie Jenner swaps suede jacket and shorts for lace-up brown boots and T-shirt as she enjoys Coachella with mystery male friend

She is something of a fashionista who has already designed a few clothing lines with sister Kendall Jenner.

So it was no surprise that Kendall Jenner stepped out in two ensembles on Saturday.

The 16-year-old reality TV star sported a cowgirl themed look as she arrived at the LED Day Club Coachella pool party at the Hard Rock Hotel in Palm Springs. 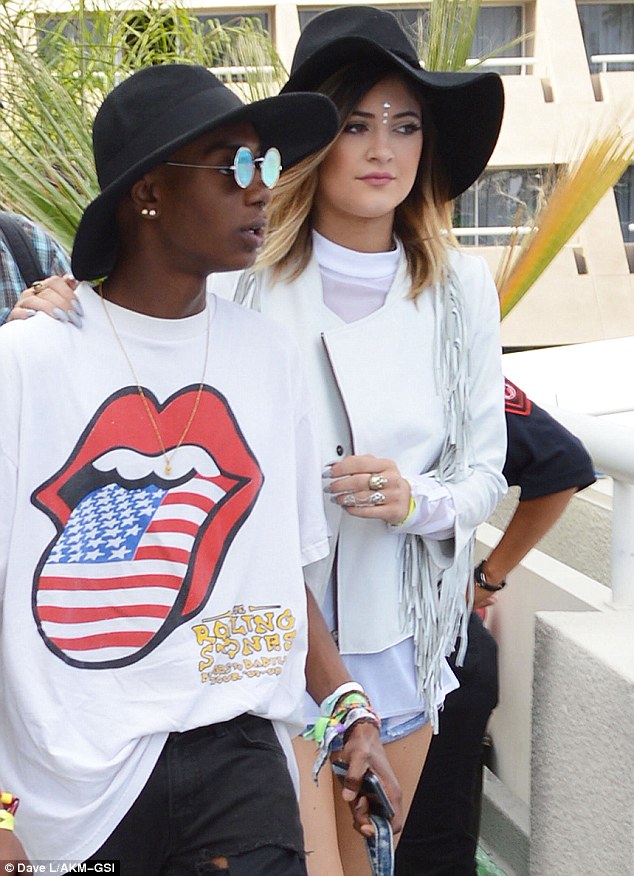 Mystery man: Kylie placed a reassuring arm on the shoulder of her male friend at the Hard Rock Hotel in Palm Springs  on Saturday

Wearing a floppy black hat and white jacket with fringes over a white top with a thick collar, jean shorts and black thigh high boots, she accessorised with a bindi on her forehead, which complemented her silver rings.

The reality show star arrived at the event with a male friend who also wore a black hat to watch
DJ Tiesto perform. 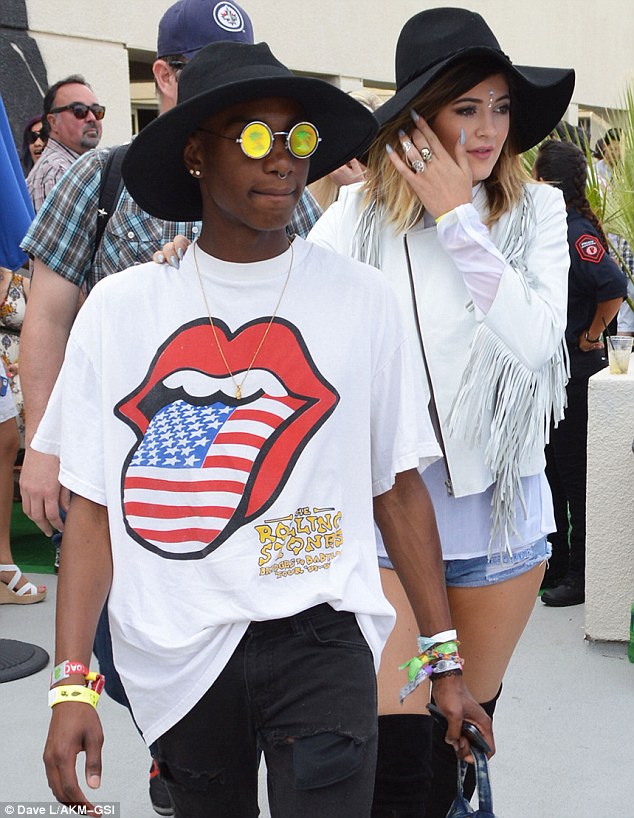 Pool party: The 16-year-old reality star was out to watch DJ Tiesto at LED Day Club 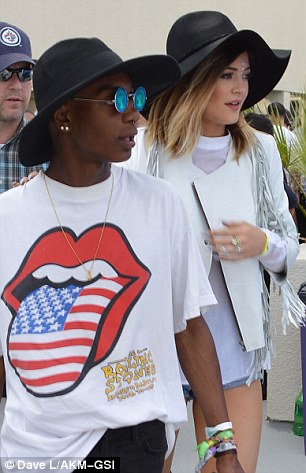 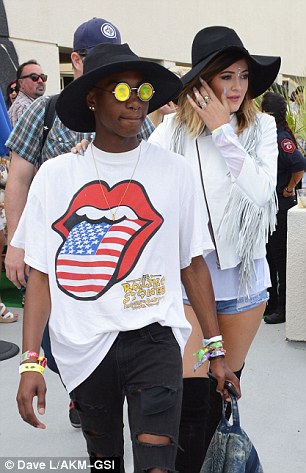 Fringes: Kylie sported a cowgirl-inspired look with a white fringed jacket, which she teamed with a black hat and leggings

However, as Kylie, 16, and her sister, Kendall, 18, are taking their fashion choices very seriously over their two weekends at Coachella, there was time for a quick change before heading to the main arena with their friends and ever present bodyguards, who are there to control the fans around them, this evening.

When Kylie emerged in the arena, she had adopted a more rock chic style, wearing a grey T-shirt along with soft brown knee length boots.

While the young fashionista has made numerous wardrobe changes over the course of the festival, she has almost always sported one go-to accessory – her black studded leather bum bag, a handy item for any discerning festivalgoer conscious of having somewhere to keep their valuables.

Perhaps she is also running low on style ideas, as Kylie’s Saturday night look closely echoed what she had worn the previous night, when she had donned a similar hat in brown, small black shorts and ankle-high black boots. 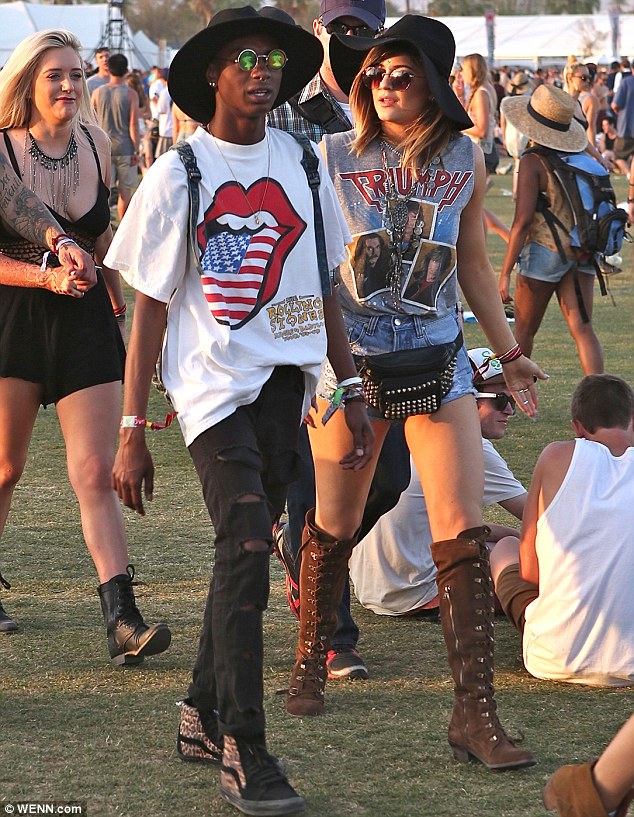 Time for a change: Kylie was able to quickly swap her outfit before she went into Coachella’s main arena 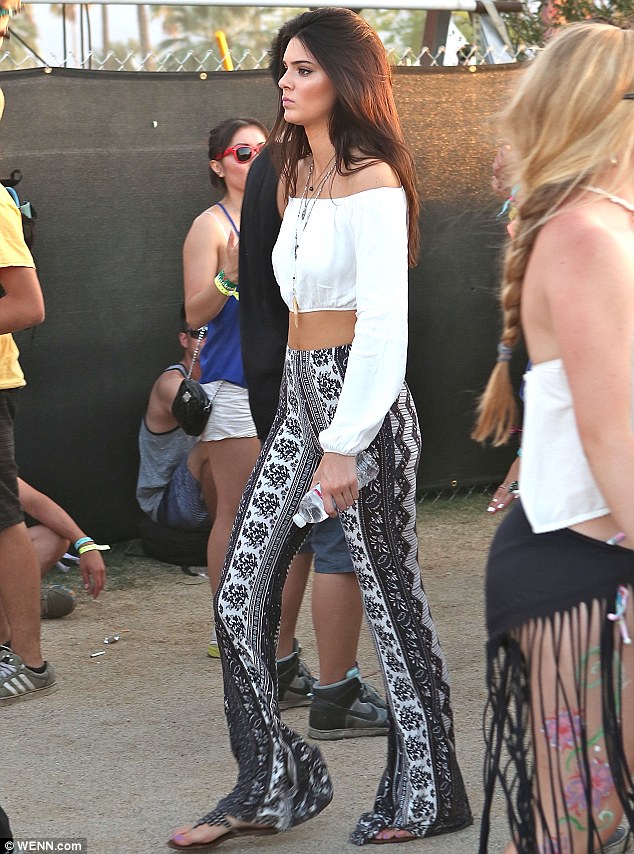 She teamed them with a Road Warrior T-shirt and numerous pendants, as well as shoulder pads made of feathers.

This evening Kendall opted for hippy inspired flared leggings in black and white pattern, along with a white crop-top, with puffy sleeves.

The girls’ differing looks is the opposite of how they dressed last Saturday, when they co-ordinated in all black ensembles. 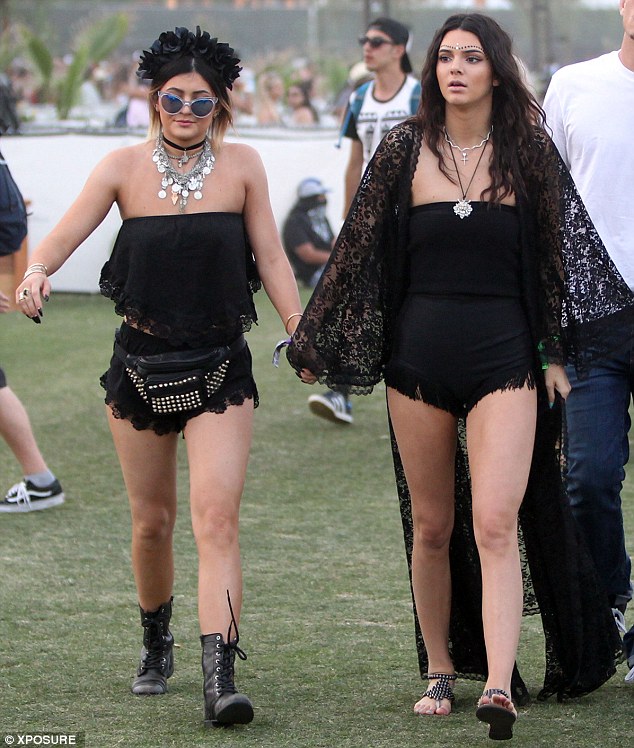 Matching: Last week at the festival the sisters co-ordinated their all-black outfits