Flying the flag for British fashion in New York, Suki Waterhouse looked breathtaking in Burberry as  she arrived at the annual Met Gala on Monday.

The model looked like she had stepped straight out of a fairytale in her pink, strapless number before gliding over the red carpet into the Metropolitan Museum Of Art.

Arriving separately from boyfriend Bradley Cooper, the 22-year-old undoubtedly made an impression in her showstopping number, complete with train. 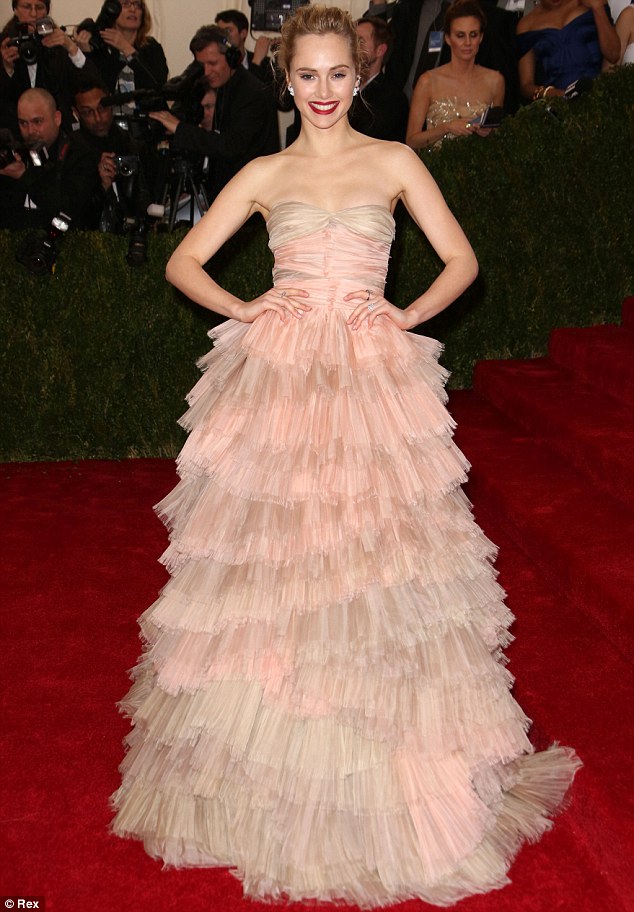 Her moment: Suki undoubtedly turned heads in Burberry as she arrived at the annual Met Gala in New York on Monday

The star – who also models for Burberry alongside pal Cara Delevingne – kept the rest of her look simple with a relaxed up ‘do and studded sparkly earrings.

She instead let her outfit do the talking, which she tweeted about earlier in the day, posting: ‘Here we go @burberry Metzilla’.

The layered creation featured two different pale fabrics while the frilly design of the skirt hid the beauty’s long pins. 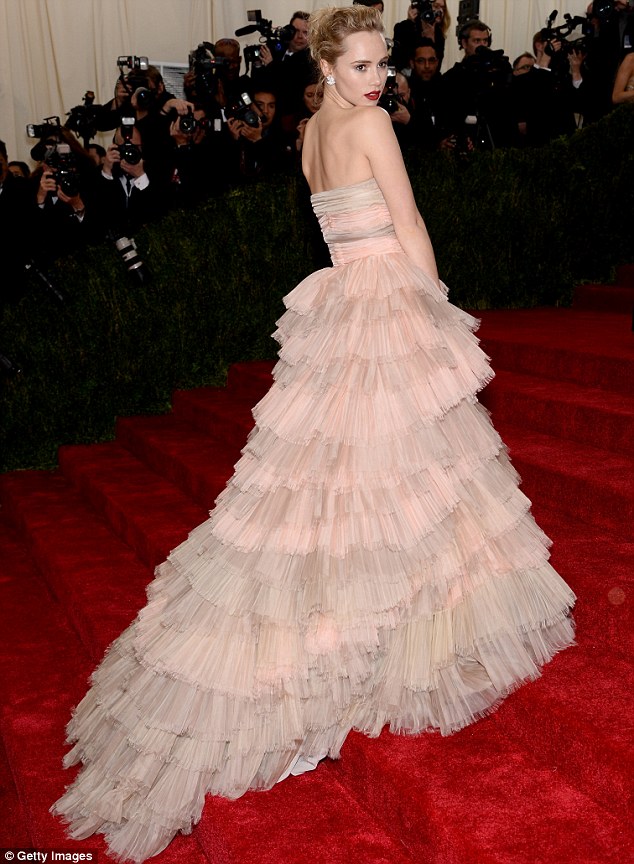 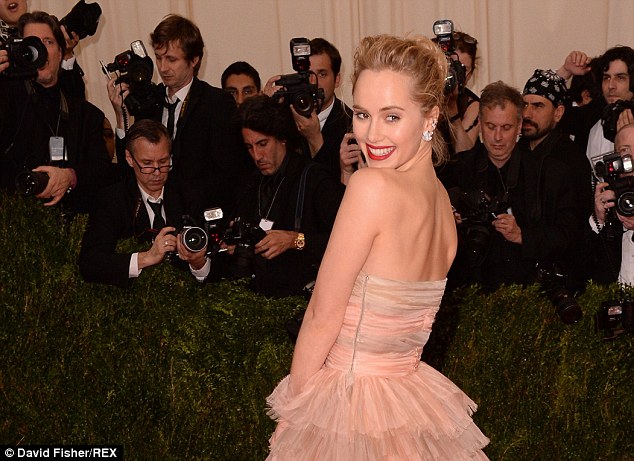 Camera ready! The 22-year-old’s hair was pinned into a simple up do while her accessories remained simple, including a number of diamante studs

She completed her ensemble with a slick of deep, red lipstick which added to the air of old-school Hollywood glamour.

After flying in from the UK, Suki appeared to be having a ball as she stuck her tongue out playfully at photographers. 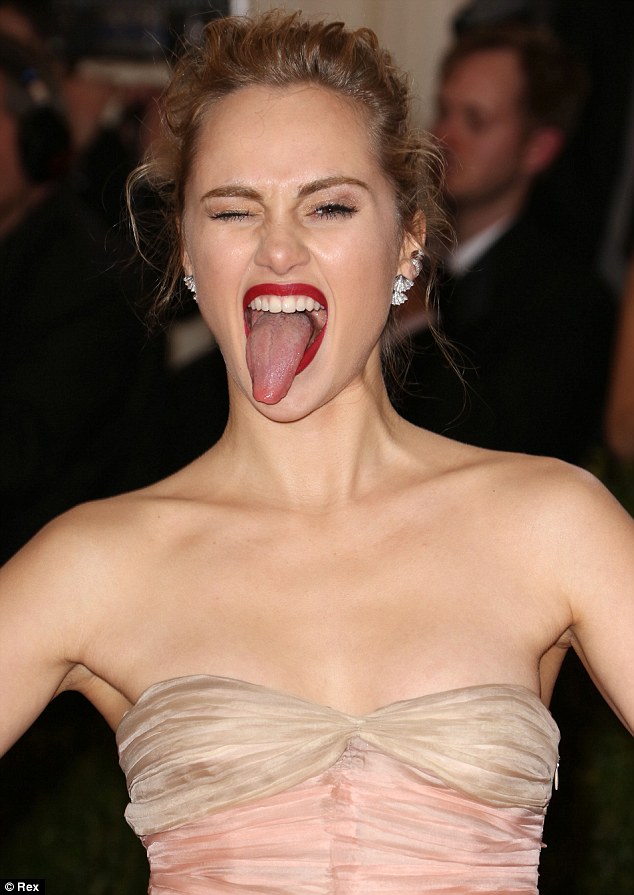 Excitable: The star – who is dating actor Bradley Cooper – stuck her tongue out at photographers 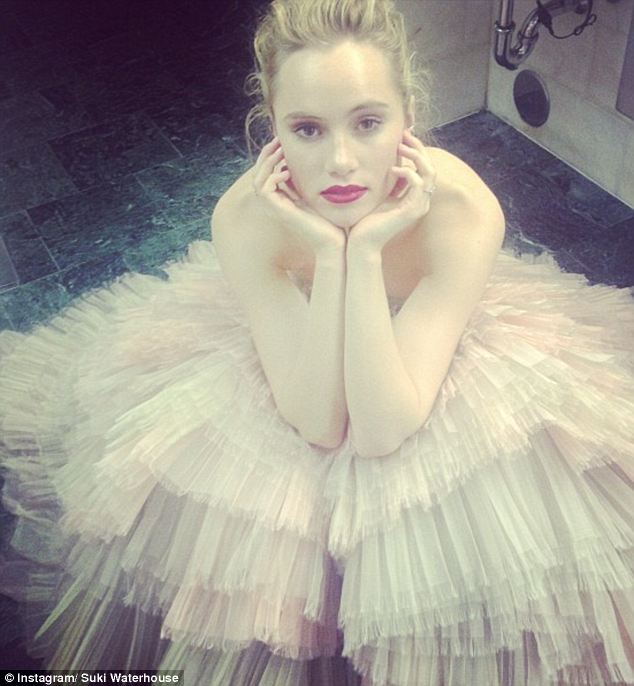 Sitting pretty: Suki shared a picture of herself sitting down with the dress around her before the party 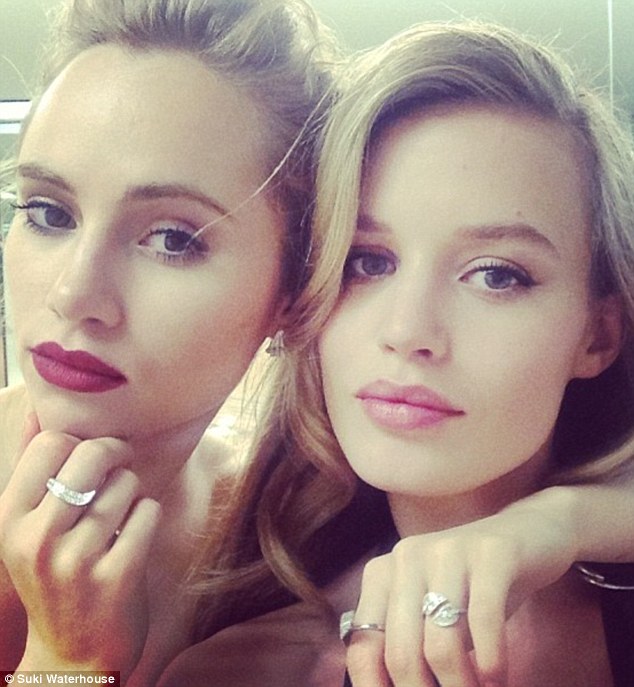 Ready for their close up: Suki shared a snap of herself with her close friend Georgie May Jagger 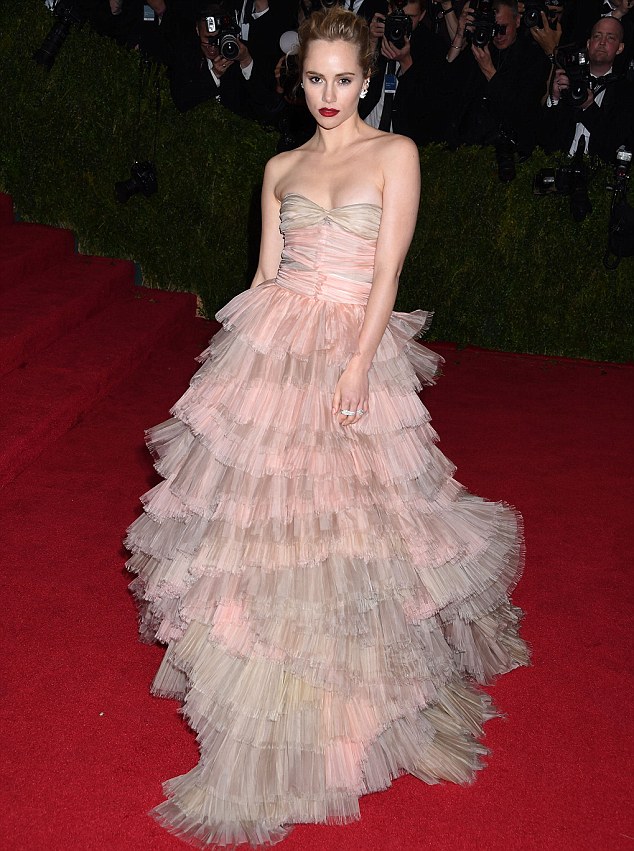 Gliding over the carpet: The outfit showed off the star’s amazing figure while her long pins remained covered 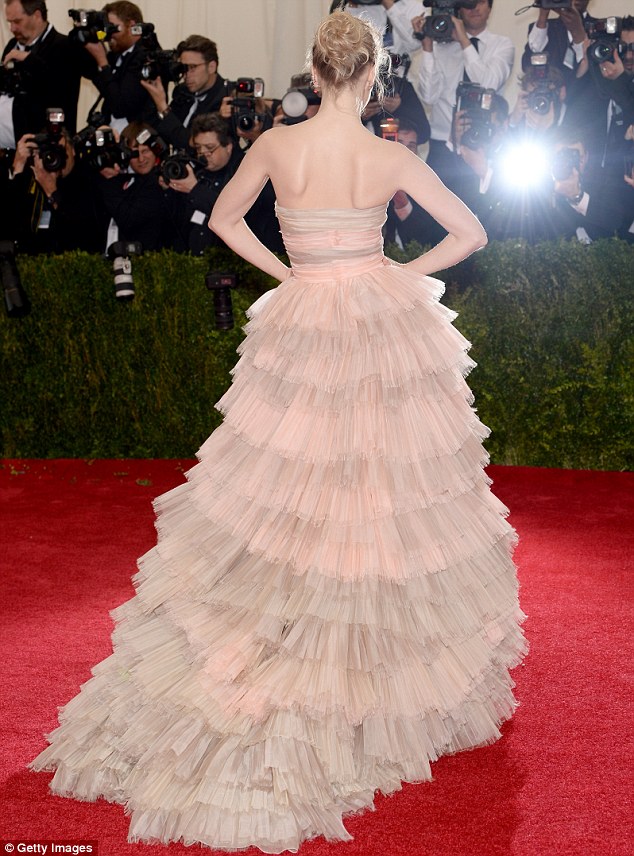 Working it: Suki’s pink number was sure to stand out from the crowd as she arrived on the red carpet

The Hangover star, who was sporting a slightly disheveled look thanks to his thick facial hair, was serving as one of the event’s co-chairs.

The leggy star had opted for an unusual look for the party, including a voluminous black blouse, complete with collar, pencil skirt and lace socks. 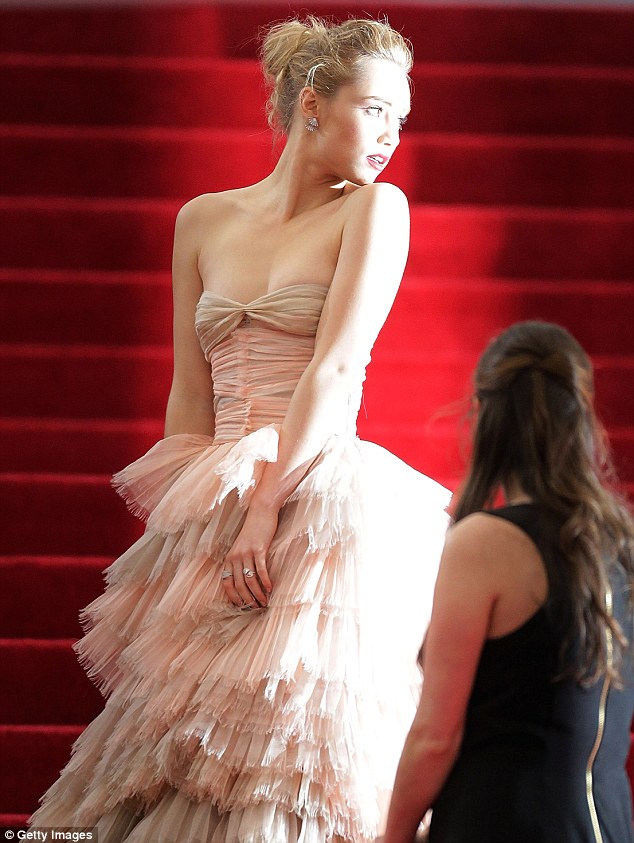 All eyes on her: Suki stood out as the light fell on her perfect features 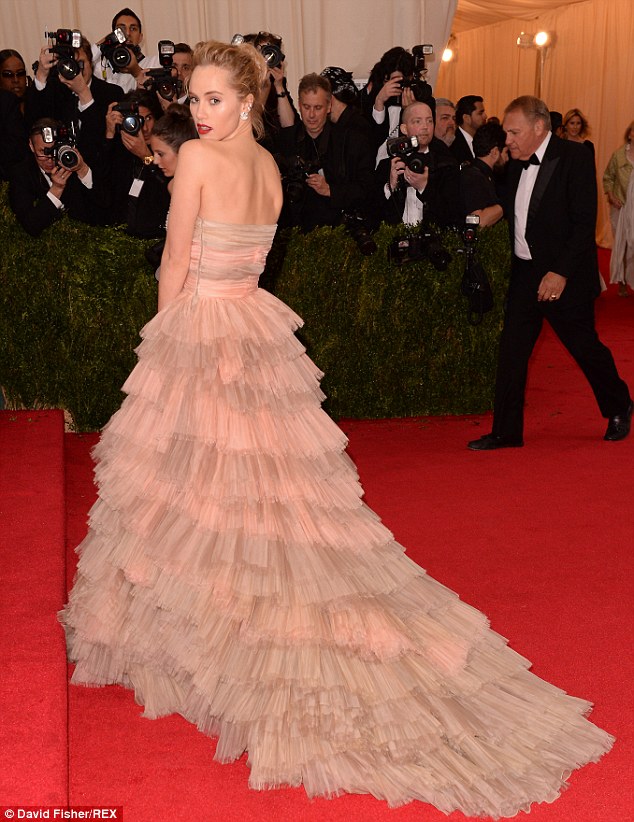 Peekaboo: The star finished off her outfit with a slick of deep, red lipstick bringing an air of old Hollywood glamour to the ensemble 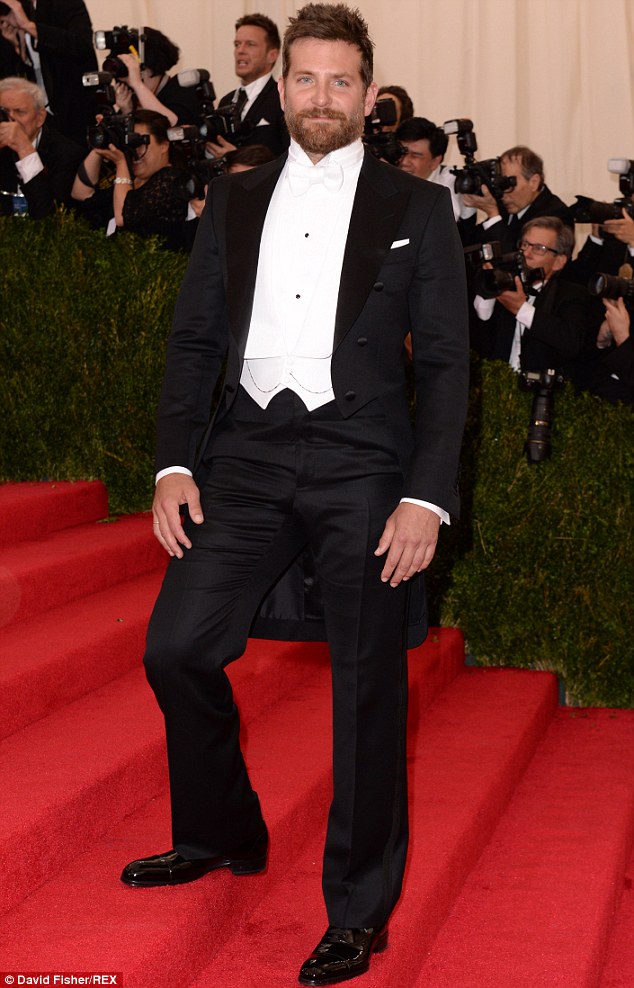 Suited and booted: Bradley arrived separately from his girlfriend, and opted for a classic tux 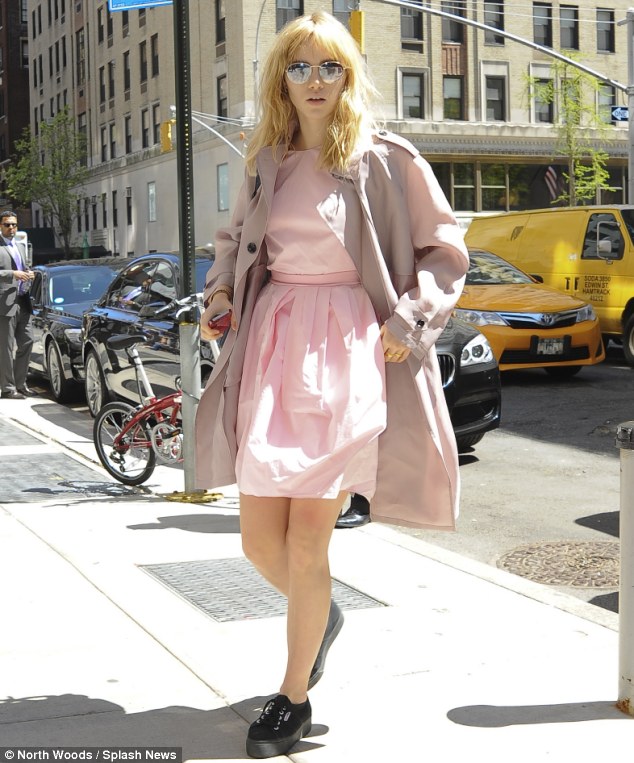 Out and about: Earlier in the day Suki was seen wearing a pink skirt and top while out in the city