It takes strict dieting and countless sit-ups to achieve the perfect washboard stomach.

But cheeky Zac Efron seemed to have had a little help as he flaunted his six pack when he picked up the Best Shirtless Performance gong at the MTV Movie Awards on Sunday.

His natural definition seemed to have been enhanced by make-up as he sauntered around the stage at the Nokia Theatre after Rita Ora ripped his shirt off. 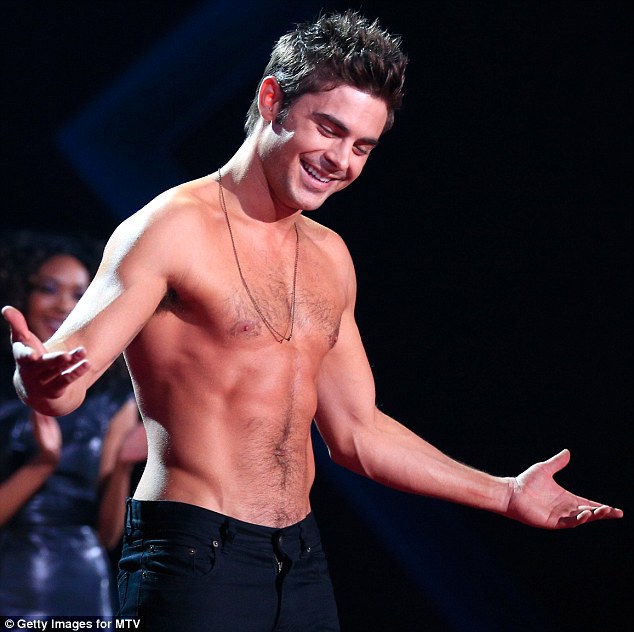 Zac l’orange: Efron’s pale face did not match his tangerine torso at the MTV Movie Awards on Sunday

And just to make his appearance all the more cringeworthy, he suffered a fake tan disaster into the bargain, with his tangerine torso a striking contrast to his pale face.

Thankfully the 26-year-old seemed blissfully ignorant as he hammed it up for the crowd, confidently gesticulating as the ladies in the audience screeched with approval.

Of course he had every reason to look smug, given he had just been given the award for Best Shirtless Performance for his turn in That Awkward Moment, and he seems to putting the embarrassment of being caught up in a brawl in L.A’s sketchy, drug riddled Skid Row area behind him. 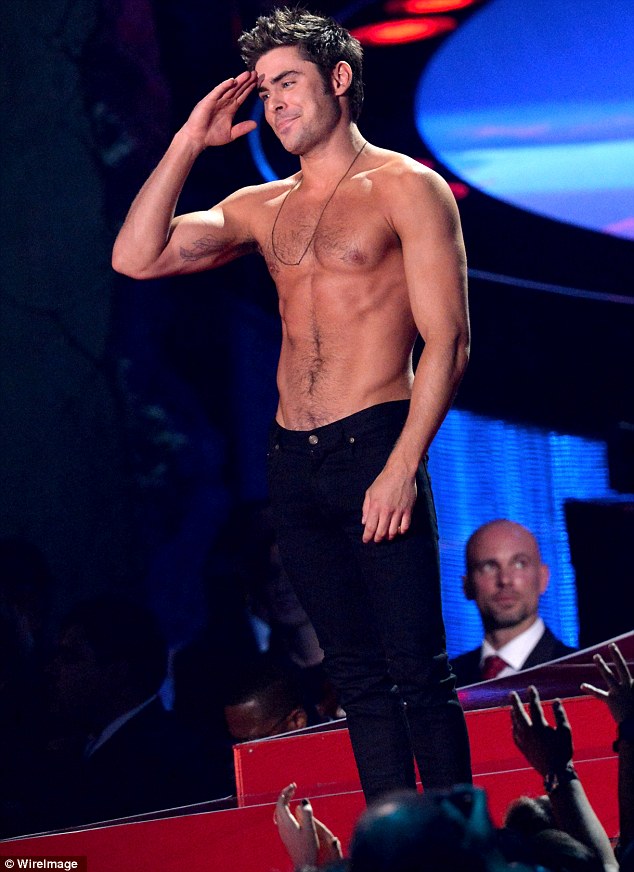 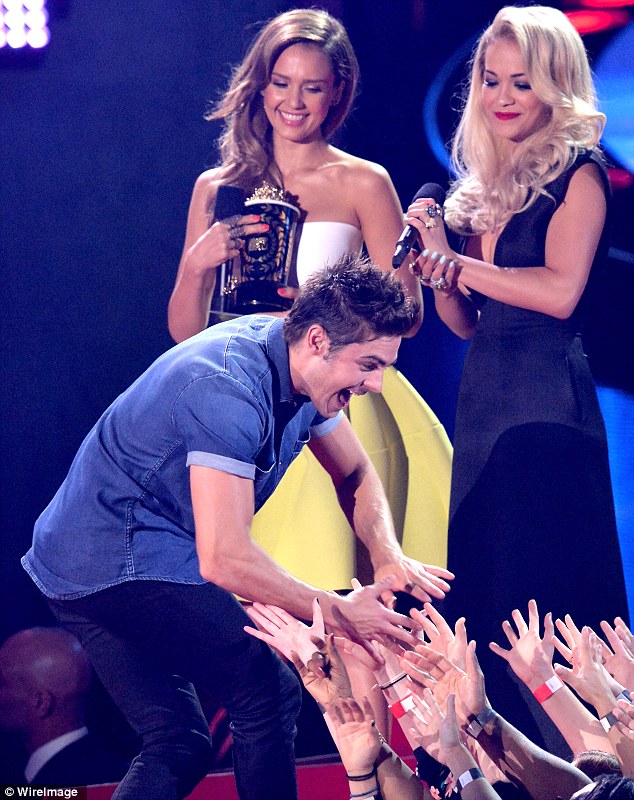 Someone has a cunning plan in mind: Rita Ora had a glint in her eye as Zac greeted his fans as he came onstage 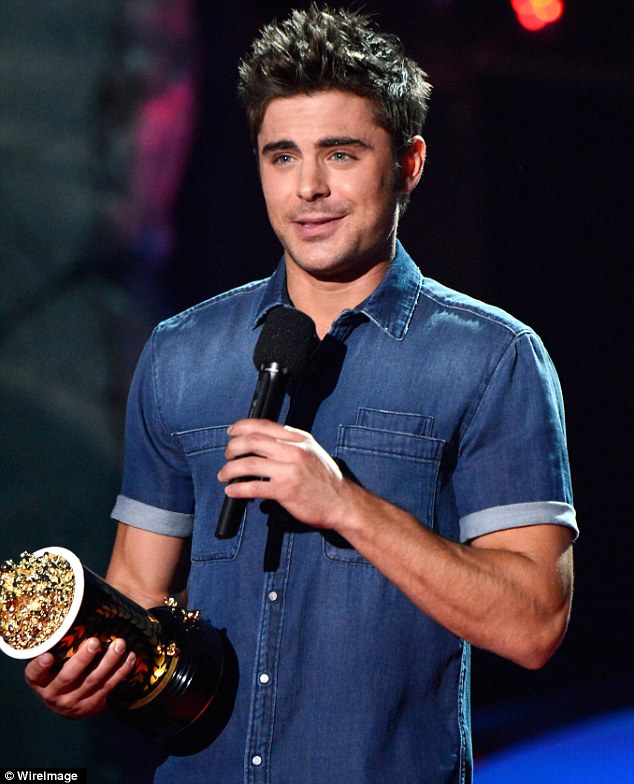 It beats an Oscar: The star looked delighted to have scooped the Best Shirtless Performance gong 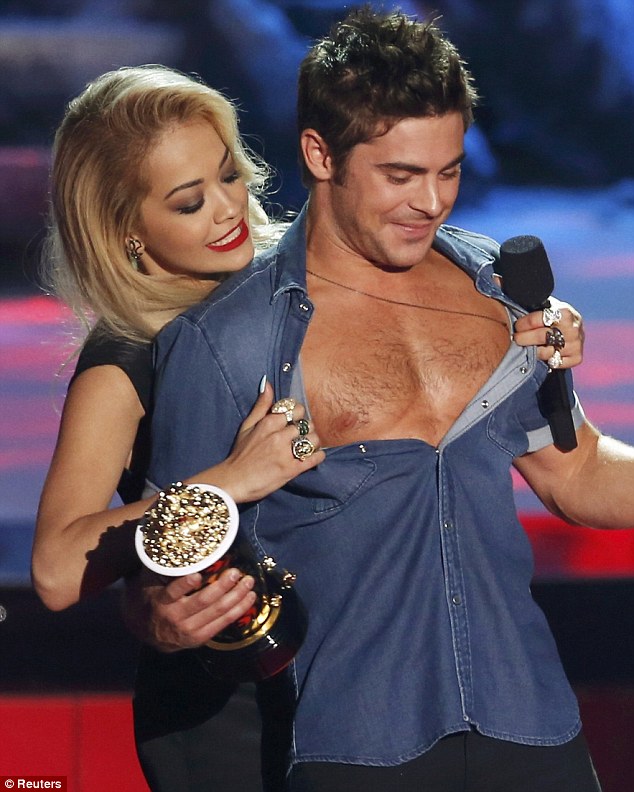 Keep your shirt on: Impatient Rita could not resist ripping his convenient snap buttons open as he waffled 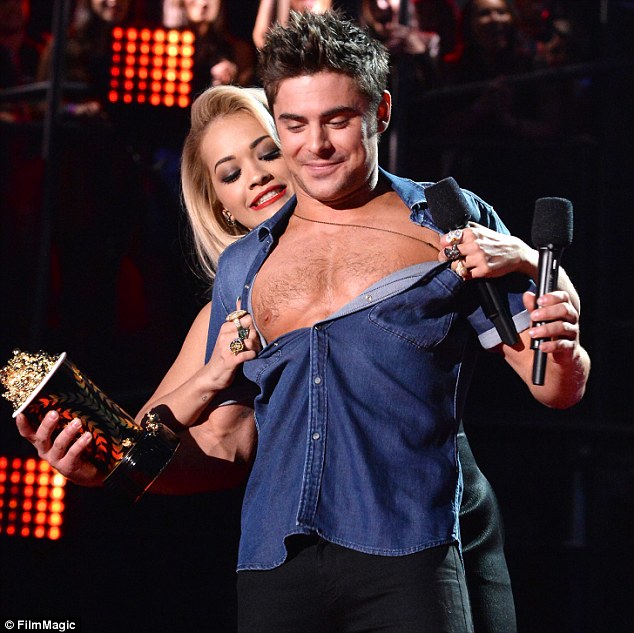 Shirt off: Rita helped Zac take his shirt off as his hands were full

He had already promised via Twitter to accept his award shirtless should he win, but seemed to be going back on his word as he hummed and hawed on stage.

Zac, who was clearly delighted to have landed the prestigious honour, told the crowd: ‘I don’t really know what to say, but thank you so much to my fans.’

However his speech seemed to rile Calvin Harris’ current squeeze Rita, who ordered him to, ‘please take your shirt off,’ when he sauntered up to pick up his popcorn statuette.

So she sped up the process herself by sneaking up behind him and ripping off his top denim shirt as he delivered his boring speech. 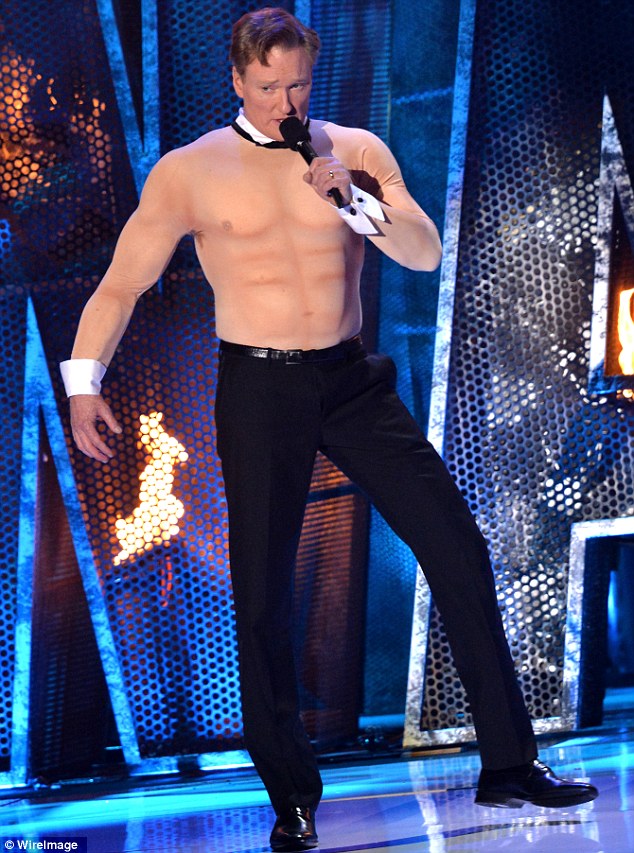 Conan’s had a lot of help: The funnyman donned a muscle suit ahead of the shirtless category 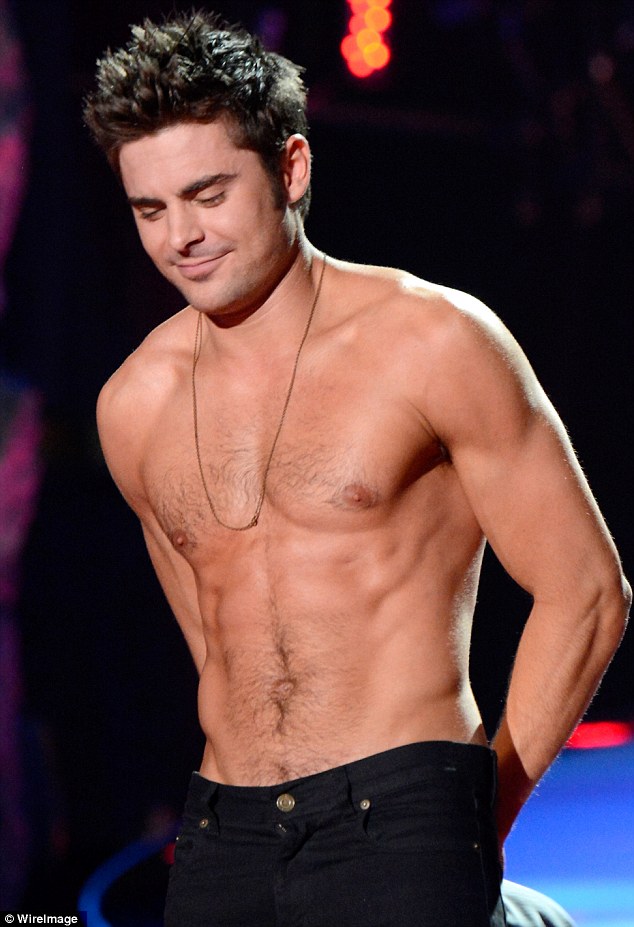 That Awkward Moment: But he seemed rather pleased to be able to finally show off his muscles 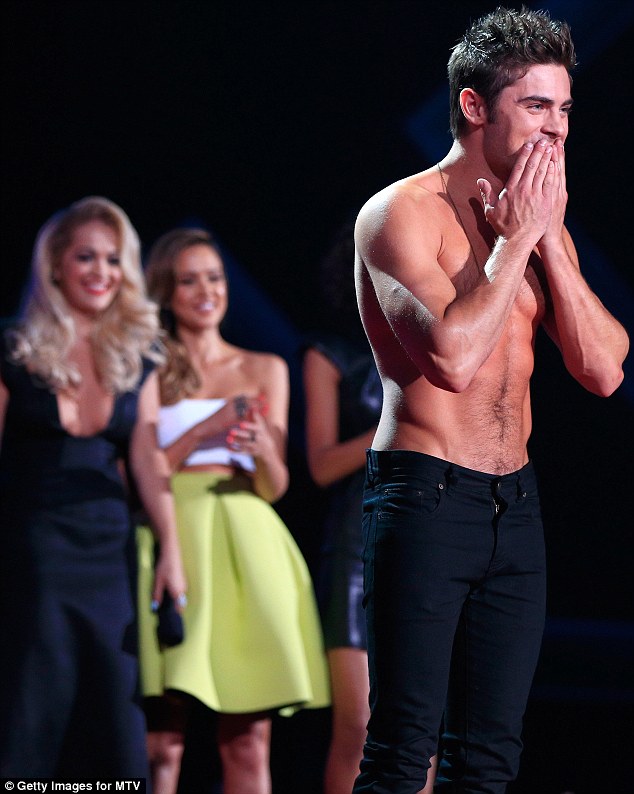 Basking in the acclaim: Both Rita and fellow award presenter Jessica Alba seemed spellbound as Zac addressed the crowd 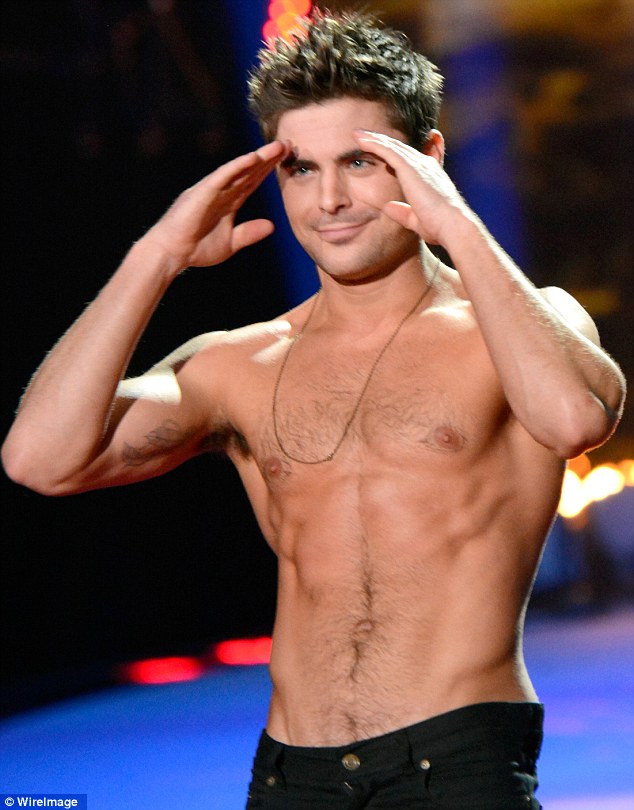 Two gun salute: The star flexed his biceps as he held both hands to his temples 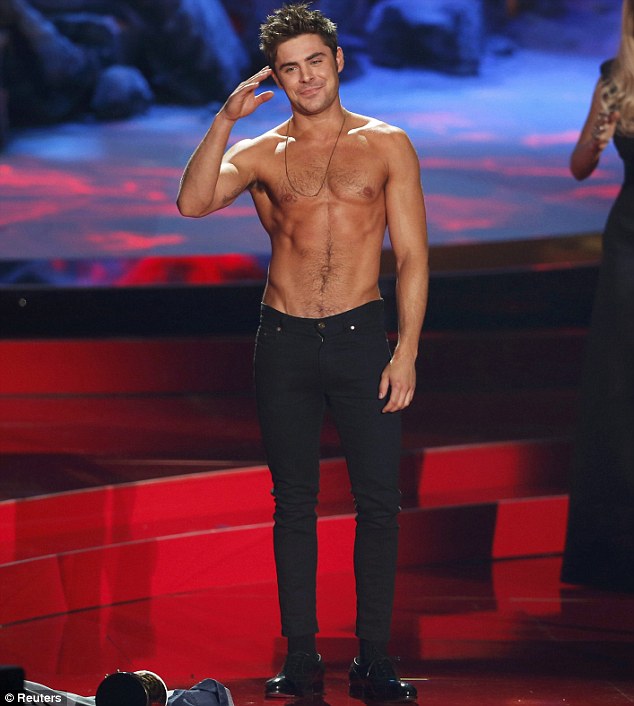 Earned it: Zac showed why he deserved the award 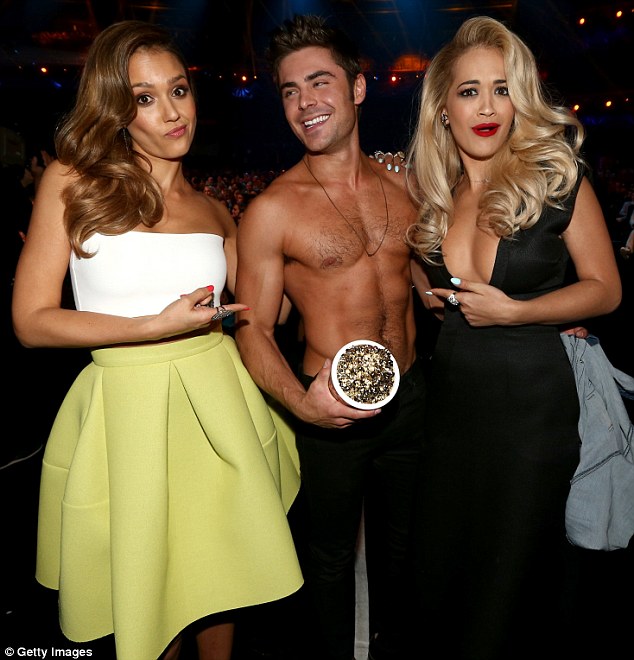 Cash who? Jessica seemed very impressed by the strapping young man as they posed together

BEST MOVIE OF THE YEAR

Will Poulter Jennifer Aniston, and Emma Roberts, We’re The Millers

Backstreet Boys, Jay Baruchel, Seth Rogen and Craig Robinson perform in Heaven, This is the End

Will Poulter, We’re the Millers

Rihanna, This Is The End